What do you really want?

Negotiating for you when I do not know really know you

Funded Projects I led or participated in. 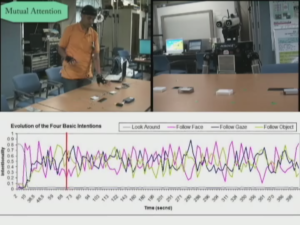 To build and evaluate an unsupervised algorithm for learning interactive behavior both in implicit and explicit nonverbal communication settings using a novel technique that combines constrained motif discovery and probabilistic networks.

The scenario used to evaluate the algorithm is a dyadic interaction in which an operator is commanding an actor to achieve some task that requires unknown number of actions to be done. The operator is using free hand gestures for communicating with the actor.

The proposed system can learn interactive behavior in three stages:

A proof of concept experiment was already conducted and the proposed system was able to discover six out of seven gestures, all seven actions, 83.5% of gesture occurrences and 87.5% of action occurrences. The final system was able to predict the actor's behavior with accuracy 95.2% on a separate test set.

Natural Listening for a Humanoid Robot (2008)

A controlled experiment was conducted in order to achieve the goals of this project in which 32 untrained humans participated. A full corpus of audio/video data as well as motion captured data and physiological data is currently under construction using the information collected in this experiment.